My novel tells the story of the hidden affair between Dutch maid, Helena Jans, and French philosopher, René Descartes, and follows Helena’s journey across the Dutch Republic in the seventeenth century. The story begins in Amsterdam in the early 1630s.

I visit Amsterdam quite frequently and spent some time there researching settings. I’m often asked about this and wanted to share some of the places that helped to set the scene. If you get chance, do visit.

Now a private residence, in the 1630s the house belonged to Thomas Sergeant, an English bookseller. Not much is known about Thomas Sergeant, but we know that Descartes lodged with him in 1634. Descartes already knew Amsterdam and had stayed there before, frequenting abattoirs looking for animal carcasses to dissect.

Stairwell inside Westermarkt 6. The tiles on the wall are thought to be original and one of the few remaining features from this time in the house.

Westerkerk dominates the square in front of Westermarkt 6 – just how much so, you can see in the images below.

Westerkerk had been completed before Descartes’ visit. I wonder what Descartes would have made of it – he was a Catholic and refused to convert to Calvinism.

View of Westerkerk from inside Westermarkt 6 – the view Descartes would have seen.

Westerkerk tower – climb it, it is well worth the effort for the view!

Noorderkerk, in the Jordaan, has limited opening times, but is well worth a visit.

Tea drinking was new in the seventeenth century. Mr Sergeant provides some of the humour in my novel and I wrote a scene in which he tells Helena, in the most precise terms, how tea should be made. As the tea steeped, turning the water from a golden amber to the colour of an old leather shoe, Helena notes she is glad she does not have to drink it!

Amsterdam’s smallest house has stayed in the same family for several generations. It was a tobacconist’s and family home before being converted into a tea shop. The building is only 2.02 metres wide and 5 metres deep! Find Het Kleinste Huis at 22 Oude Hoogstraat.

East India Company House (now the University of Amsterdam) – look out for the VoC above the door.

Almost next door to the tea shop, you’ll find an archway through into the courtyard of the East India Company House (Vereenigde Oostindische Compagnie), which is now part of the University of Amsterdam. From the canal side on Kloveniersburgwal, the building looks quite unremarkable, but this hidden courtyard is a treasure.

In the novel, Betje, an older, streetwise maid, shows Helena that she has mastered her letters by reading the VoC above the door. 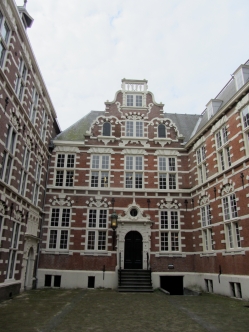 In the gallery (and the rooms to either side), where Rembrandt’s Night Watch is displayed, you’ll find an astonishing selection of Dutch genre and landscape paintings from the seventeenth century. Look out for van Ruisdael’s view of Haarlem, which shows the linen fields. The area was known then for linen bleaching and cloth from across Europe was sent there to be processed. I found it very difficult to find anything written about this, and was almost entirely reliant on van Ruisdael’s art to understand how the linen was produced.

Look out also for Vermeer’s The Milkmaid. Vermeer’s work often features maids, but he does not show them reading or writing, only wealthier women were becoming literate at this time. It is known that Helena and Descartes corresponded, although these letters have been lost. This intrigued me. Explaining how Helena became literate (and why) became central to the novel and to revealing her character and backstory.

Also on display at the Rijks Museum is Descartes’ nocturlabe, a nocturnal watch. Other than his correspondence, it is the only item thought to be his that survives. The nocturlabe is displayed in dimmed light, but it is possible to make out a list of French towns, inscribed on the inside lid, as well as Descartes’ name. Click on the images to enlarge.

There is no better way to see the city than from the water; it is a quintessentially Dutch thing to do! And it’s not hard to see why Descartes loved the city, nor to imagine Helena on her errands – and most likely knowing the city better than he did. We do not know where Helena is from, but the scant evidence seems to suggest Leiden. There would have been a day when she arrived in Amsterdam for the first time; when she first stood in front of Mr Sergeant’s house on Westermarkt. What would she have made of him? What would she have made of the city? How did being there change her? 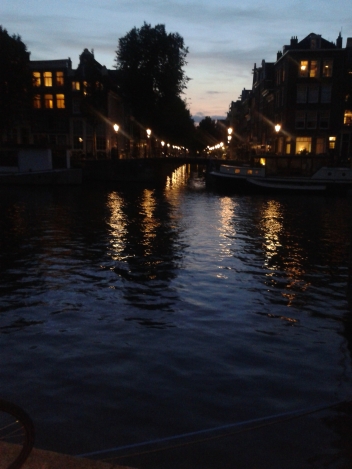